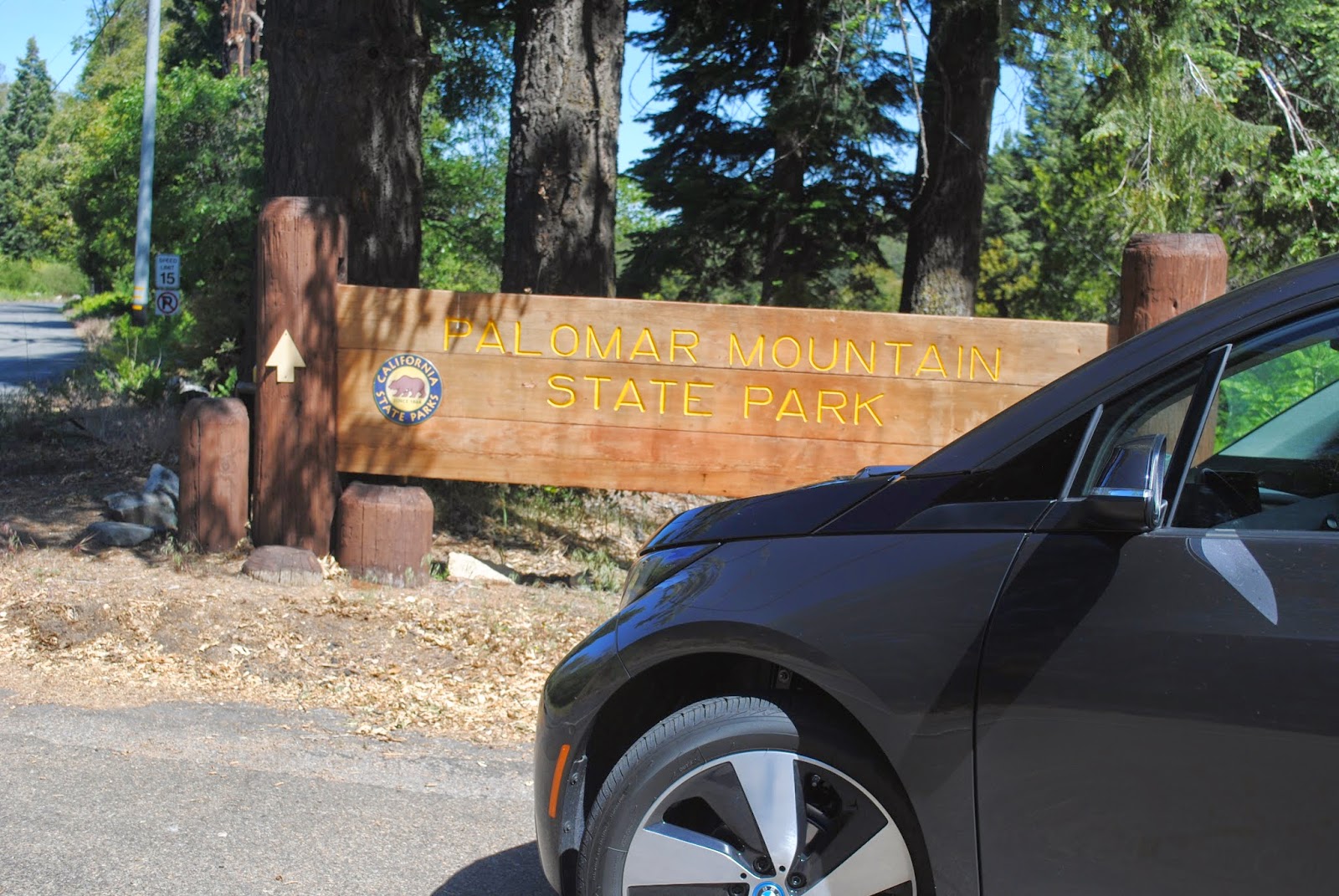 A little over two years ago, on April 7th, 2012, I took Julie's brand new BMW ActiveE on a mile high climb and 104 mile round trip up to the peak of Palomar Mountain. You can read about that trip here:  April 7th 2012 drive

I'll plagiarize a bit of my own previous article in my writing about today's May 26th, 2014, epic mountain top trip with the BMW i3.

My first words are that the BMW i3 is far more than "just" a city car.

Imagine a perfect sphere that weighed (including driver) 2900 lbs. Imagine the energy and strength required to push the sphere up an incline from sea level to 5300ft. Now add the energy to push that sphere 102.5 miles down the road at normal driving speeds. That is the energy that is contained and regenerated in our electric BMW i3.  A most incredible and amazing car.

What a great morning. As crazy pioneers we test our cars to the limits. Why? Because we love cars, love to drive and love to explore where the outer edge is.

Today was a picture perfect day, I planned a 102 mile trip that began at sea level and climbed 5300 feet to the top of Palomar Mountain, then returning to sea level and home on a single charge. This is the exact same trip and same route as the 2012 ActiveE trip.

Leaving home I drove my i3 up Palomar Mountain. The first 45 miles climb a total of 2000 feet. The last 7 miles the climb is 3400 feet. It was an awesome drive up the mountain. The i3 is very fast, light and nimble in the twisty's. 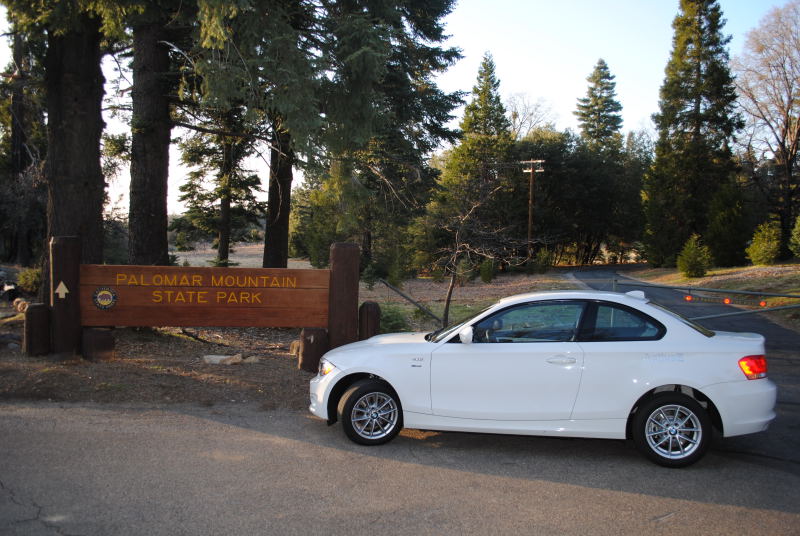 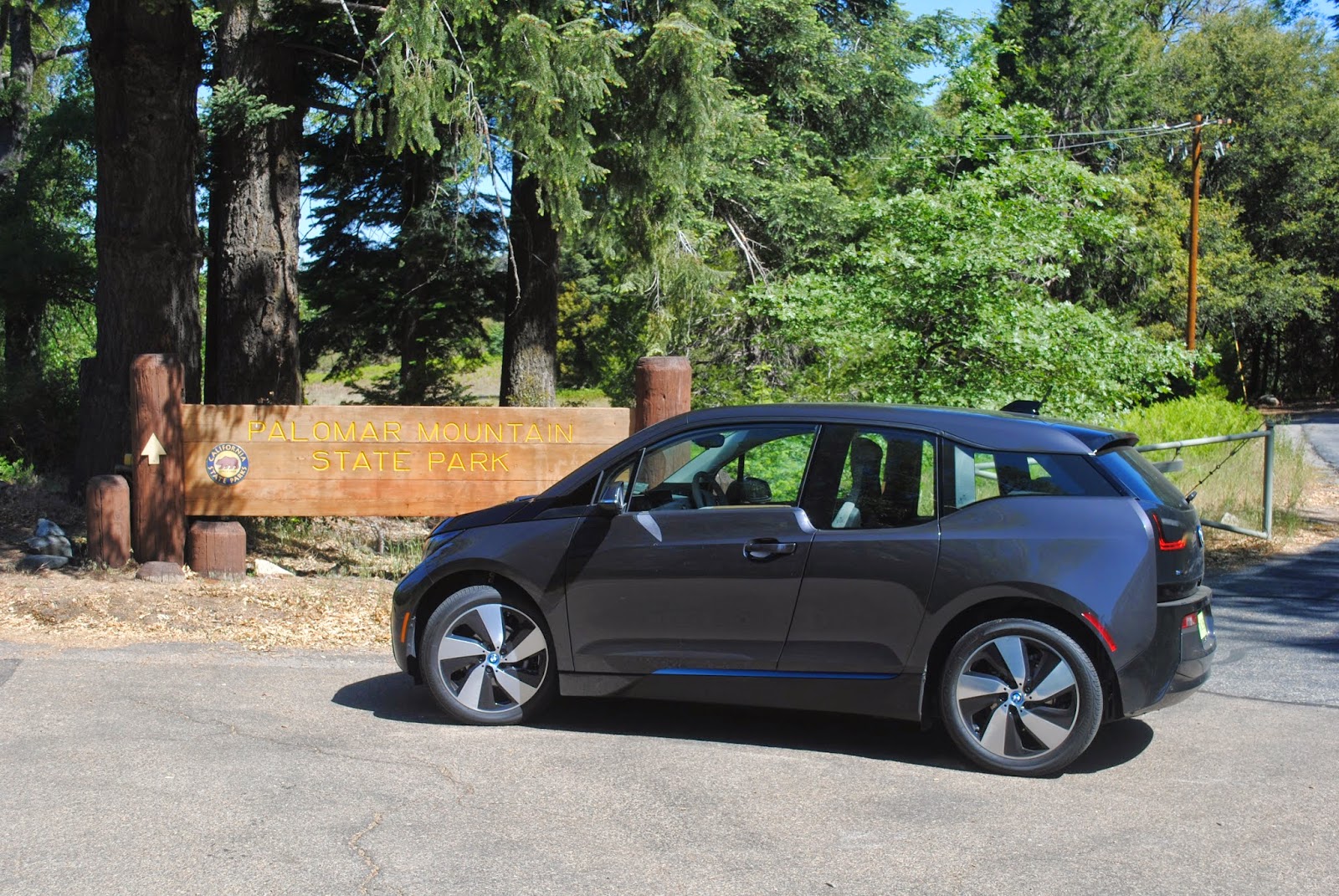 Arriving at the 51.3 mile half way point, the top of the mountain, I had roughly 20% battery left and 8 miles of range with an efficiency of 3.1 miles per kwh. When I did this trip in the ActiveE,  I arrived at the top with with 23 percent battery, 10 miles of range and a 2.4 miles per kwh efficiency. However and very importantly, in the ActiveE my average speed was only 29.6mph and this trip in the i3 the average speed was 39.7 which no doubt was less efficient at the higher speed. 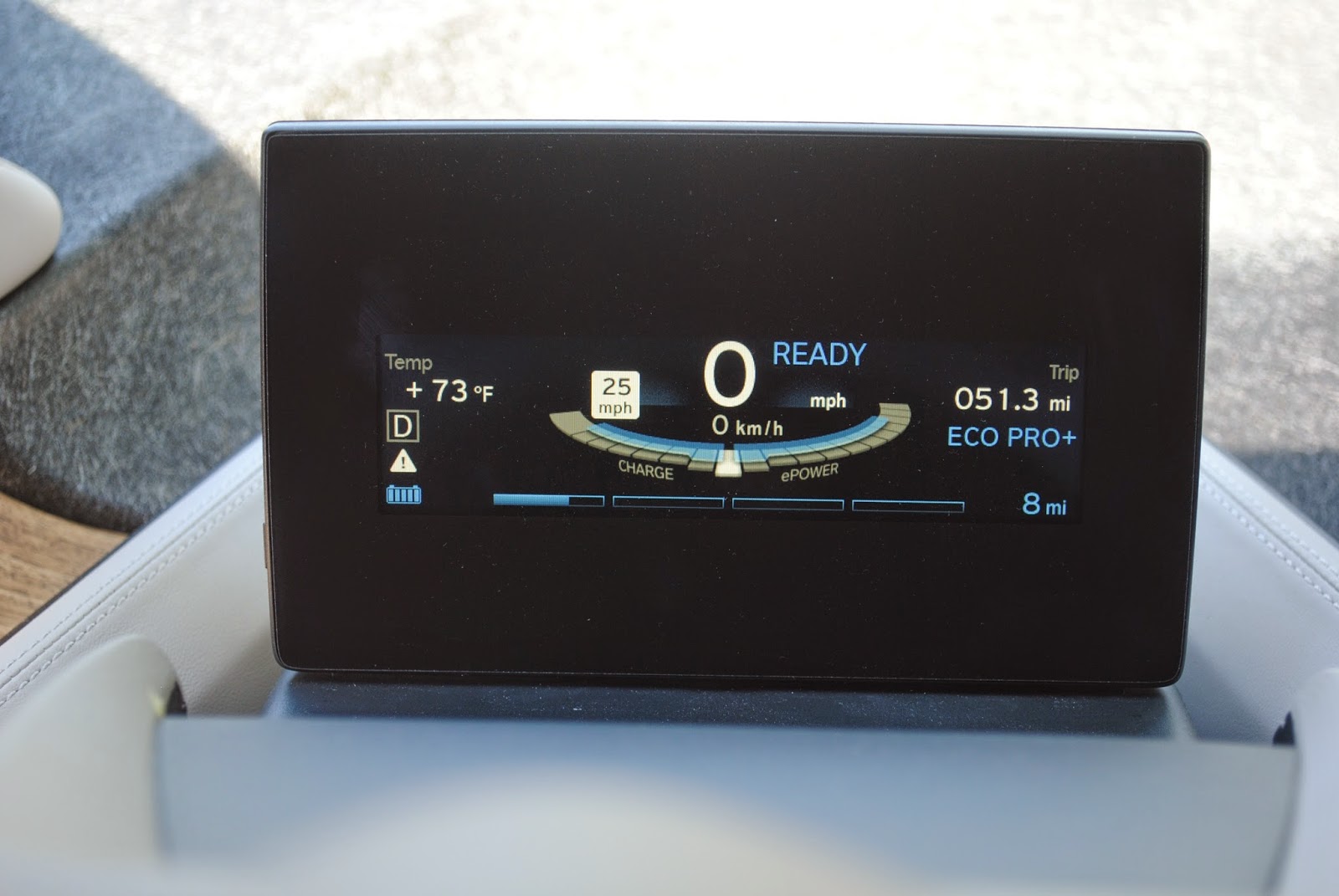 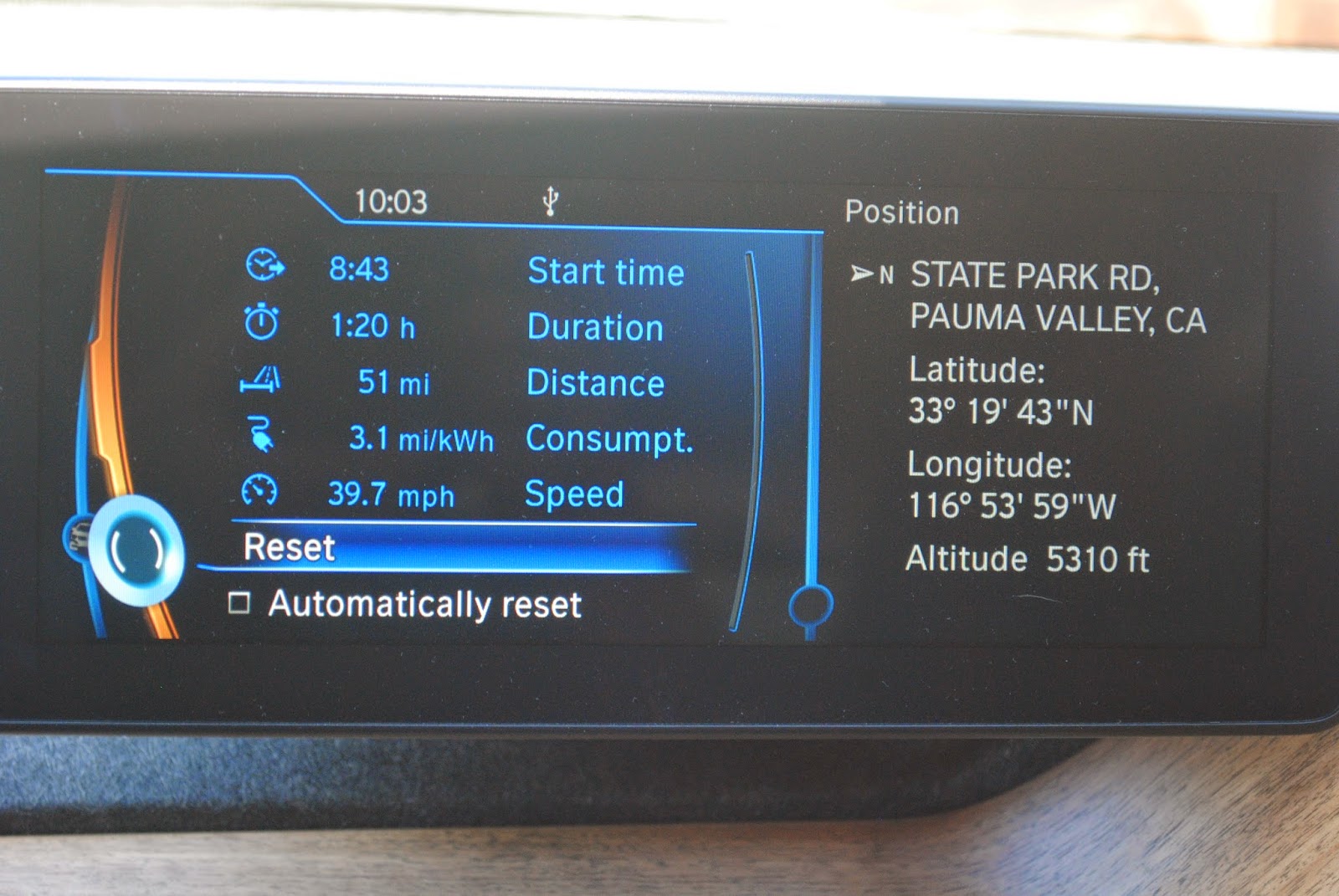 It's a little unnerving being 52 miles away from home and having only 8 miles of range showing! At the bottom of the mountain, still 2000 feet above sea level and 45 miles to home, I was back to around 33% battery and not so certain I would make it home without the need to pit stop. In the prior trip in the ActiveE when I hit this mark it was 36% battery left.

I had two emergency plans for charging as I was fairly sure I was going to need it.  The first one was the BMW dealership in Escondido about 20 miles from the home.  I hit that offramp with 13-14% range and decided to press on.  The next emergency charging location if needed was BMW of Vista, about 6 miles away from the home.  I hit that offramp at 4 miles of range showing and I knew I had a fairly good size hill to go up to get to our home......so......

What do I do?  Simple, you press on as a crazy pioneer to find out where the endpoint is. (warning! do not try this at home :)

A little over 1 mile from home, I hit zero on the miles but there was just a bit left on the battery bar.  So up the last sizable hill to our house which is on a street named Hillside so you get the picture.

OH NO, the i3 started slowing down and then came to a complete stop just 300 ft from my driveway!  As I walked up to my front door, My Iphone said I had arrived at my destination!

So the exact range of this trip in my BMW i3 was 102.5 miles, a mile high climb and descent, and 5.1 miles per kwh efficiency. 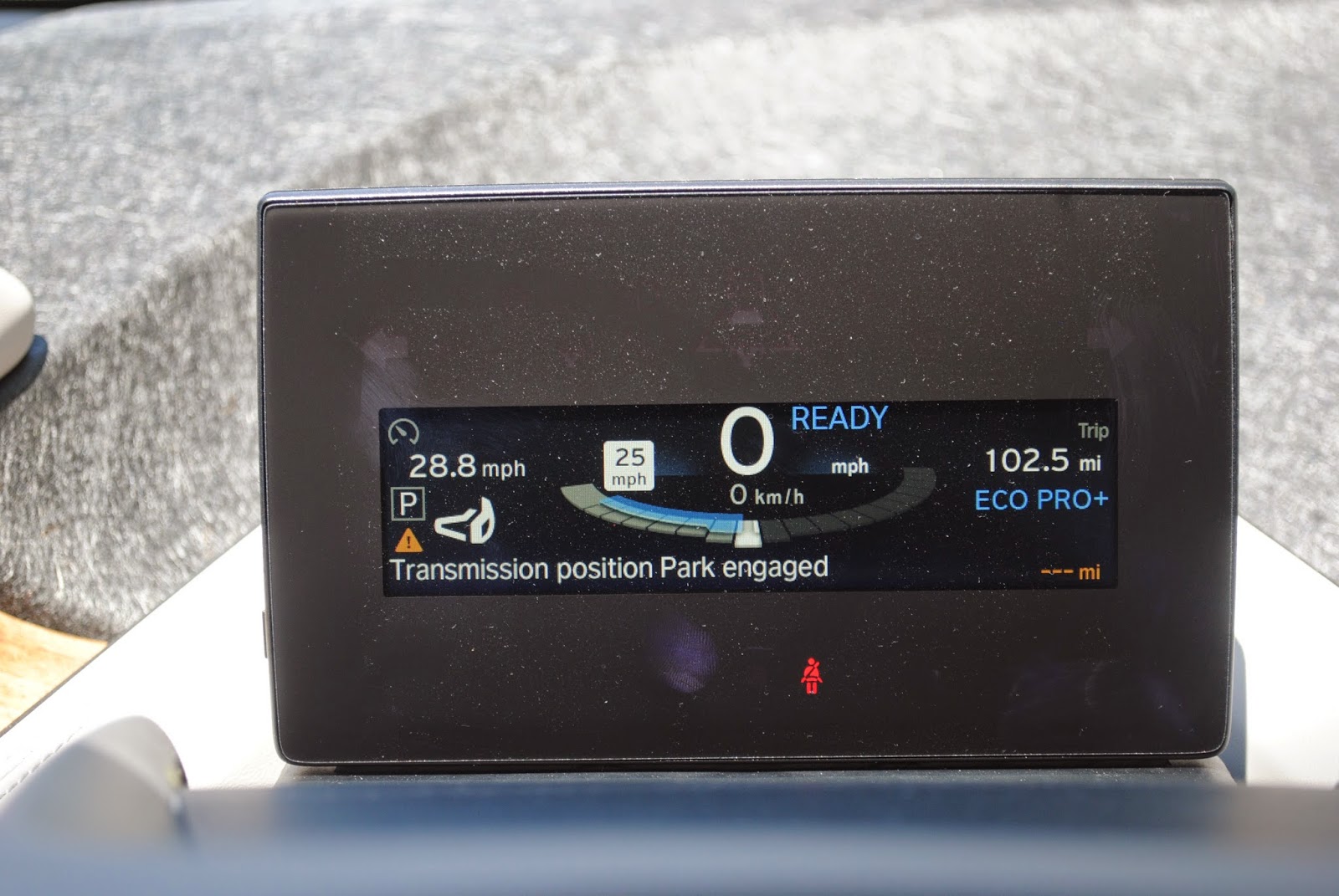 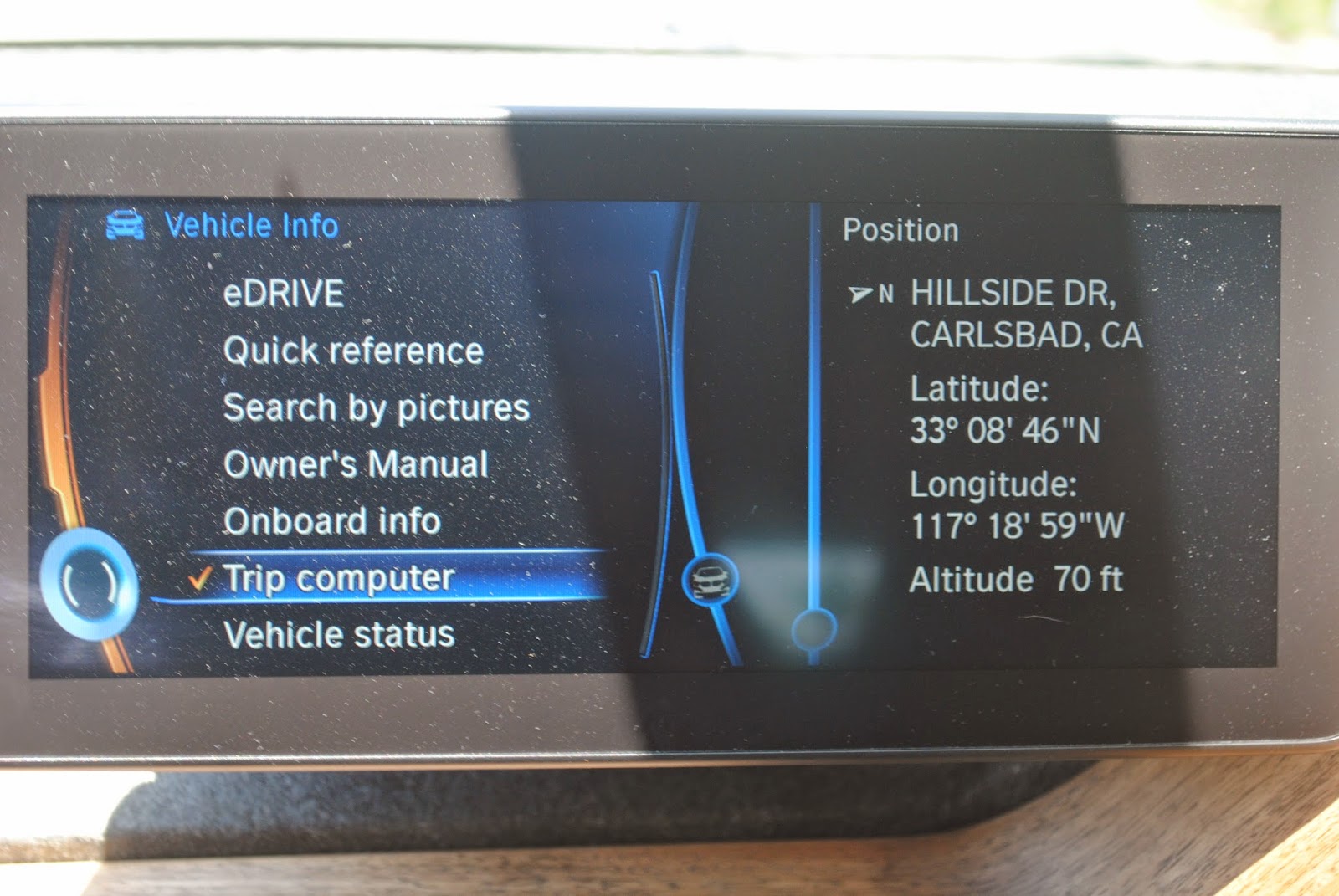 I drove the exact same route as I did two years ago, traffic was very light today and I did not have the chance to draft at all.  Two years ago it was heavier traffic,  more drafting, and slower speeds as a result of the traffic.  In the 2012 ActiveE trip it was 29.6mph, in the 2014 BMW i3 trip it was 39.7mph.

In both the ActiveE and the i3, zero means zero.  At best you might get 1/2 mile more.

In the Active E the drive was in eco pro.  In the i3 it was in mixed eco pro and eco pro plus.

Both drives I used the air con about 25% of the trip set at the second level.

I would have never passed up the chance to top off at the Vista BMW dealership under normal driving conditions. But this was about a max test, stuff that a car guy does to find out where the edge is.  I knew I would be close, within a mile or two and within easy walking distance to the home.  It's kind of funny I ended up just 300 feet from my driveway after 102.5 miles!

We have so many L2 chargers around us that if we are close on the range like the situation today, it's an easy 15-20 minutes on the charger to get an extra 5-7 miles in an emergency.

There is a discrepancy of about a mile on the trip lengths and the i phone has it as 103.  I took the same route, so must be with the navs.

The BMW ActiveE when new, would go about 3 miles further than the i3 on this 103 mile trip with a mile high climb.

I am super impressed with the BMW i3!